This is example 2 on how to sync an audio track to a progression in Mapping Tonal Harmony Pro.

In case you haven’t read the previous post, here’s a link:
How to sync progressions to audio tracks in Mapping Tonal Harmony Pro

Multiple repetitions of the form

Now that you know how to sync one statement of the form, syncing multiple ones is fairly simple.

But first we need to know how many times the form is played in the audio track. 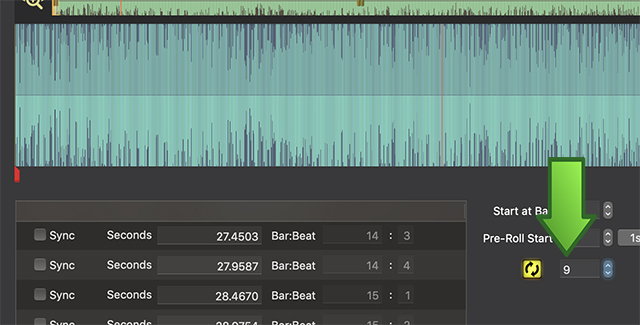 The last marker will be linked to measure 145 beat 1

Now let’s zoom in to the right and find the spot where measure 145 beat 1 is in the audio track. Select the last marker, play from a few seconds before the end and hit the Update Sync button at the downbeat of measure 145.

All the beats between the first and last have been re-calculated. The audio is sync to the progression already but there might be a few places where it is off (unless the tempo in the performance was perfectly steady)

I would expect the audio getting off-sync in some places. To fix this the best way is to make some of the calculated markers into keyframes. By doing this all the other markers will be re-calculated again and the sync will be much more accurate.

There’s no one way to do this, sometimes the audio sync will be perfect with only 2 keyframes. I will show you how I would do it in this example so as to show you the options you have.

So, I played the audio with the sync and in the 3rd chorus the audio is already one beat ahead of the syncing.

I’ve found the most effective way to solve this is to add keyframes to some first measures of the form. That’s where numbering the measures comes handy.

In the following video I demonstrate how I add a few keyframes to the first beats of some occurrences of the form.

Visit mDecks.com to find more about all you can do in Mapping Tonal Harmony Pro