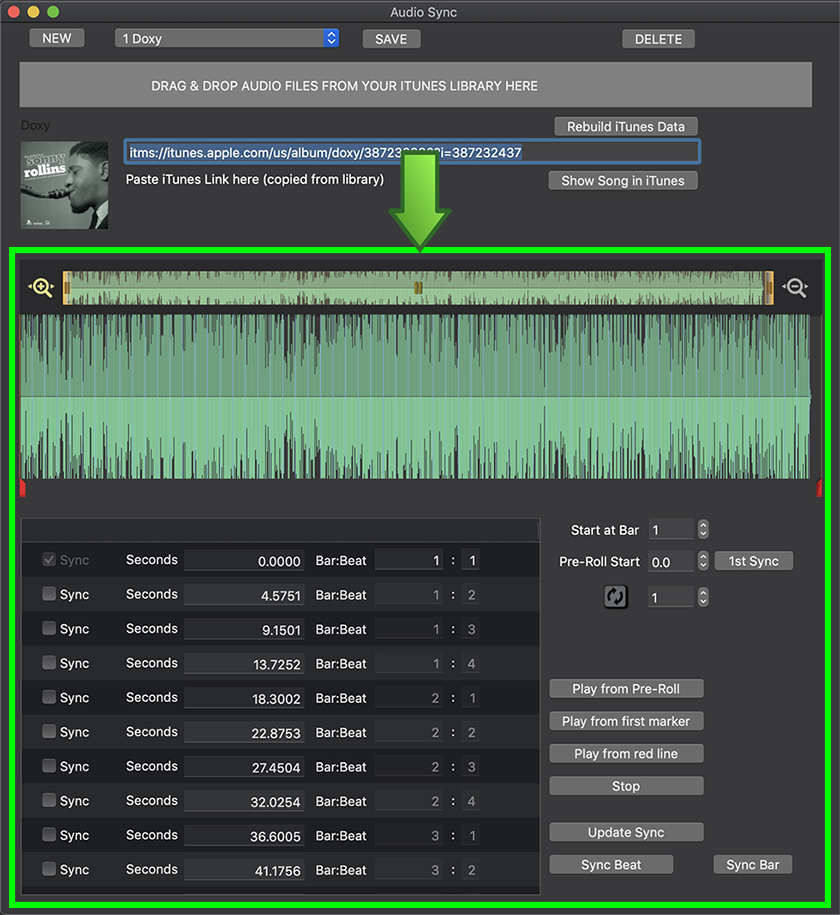 Before you read this post please make sure you take a look at the previous post:
Audio-Sync in Mapping Tonal Harmony Pro 7.5

In order to sync a progression in Mapping Tonal Harmony Pro to an audio track you need two things:

Here’s the same info in this post in video

First I need to create or load the harmonic progression in Mapping Tonal Harmony Pro. Luckily I have my 1000+ Jazz Standards Bundle which comes loaded with all the best-known standards, so I will not have to analyze nor create the progression for Doxy.

Just in case you want to check this bundle out I am adding a link to the download. Every jazz standard in this collection was carefully analyzed and entered into Mapping Tonal Harmony Pro. By the way, it also includes all three volumes of “The Jazz Standards Progressions Book” in PDF which is a great. 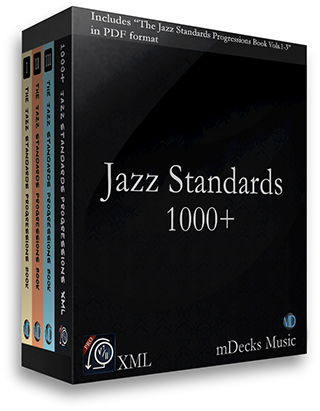 OK, DOXY… I have it loaded in Mapping Tonal Harmony Pro 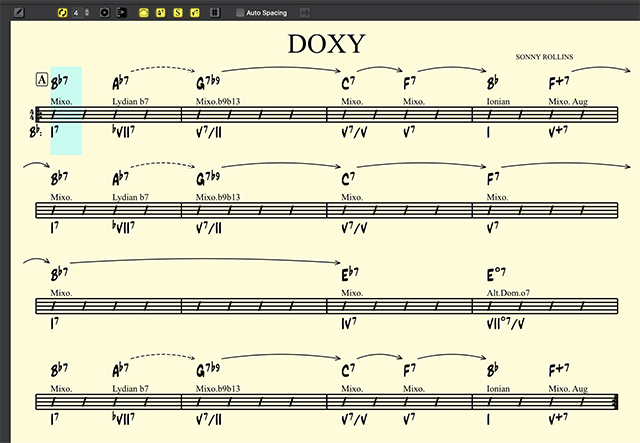 Now I need the audio track

Go to iTunes and search for DOXY by Sonny Rollings. Since I do not own the track so I will ask iTunes to show it to me in the iTunes Store (I could have used some other version of the song already in my library but I wanted to explain the entire process including the purchase of the track in the iTunes Store to be more thorough in this tutorial) 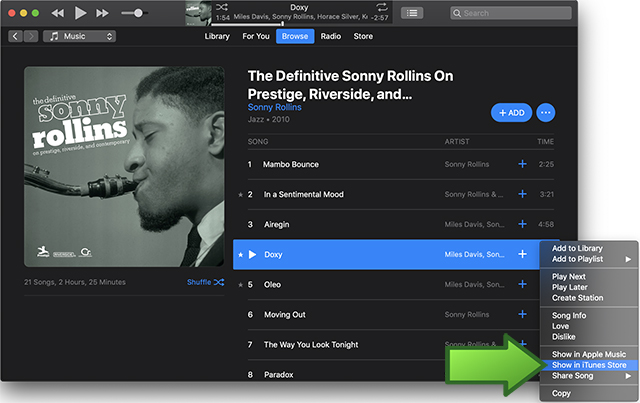 Once in the iTunes Store I can purchase the track and download it. Now it’ll be in my iTunes Library 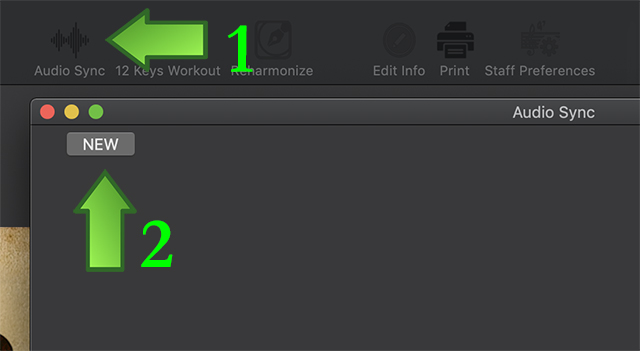 The Audio-Sync window will populate with:
A popup button with the number 1 (because is the first audio track I am syncing with the progression Doxy in Mapping Tonal Harmony Pro)

A Drag & Drop Area and some other empty fields.

An optional step before you sync the audio would be to save a link to the track in the iTunes Store. This is only useful if you want to share the audio sync with others. 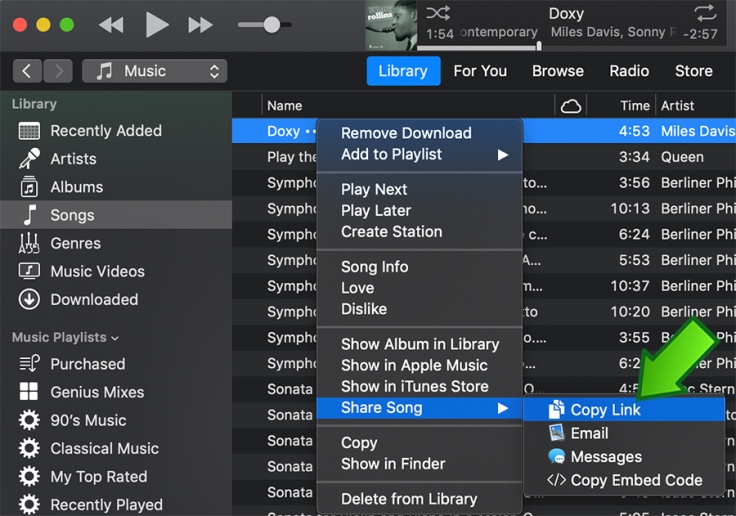 Then go to Mapping Tonal Harmony Pro and paste it in the text box next to the album’s picture and press ENTER.

The syncing process is fairly simple once you understand the concept behind it.

Now that the track is linked to the progression we just need to worry about the lower section of the audio-sync window. Here’s were all the syncing is done. 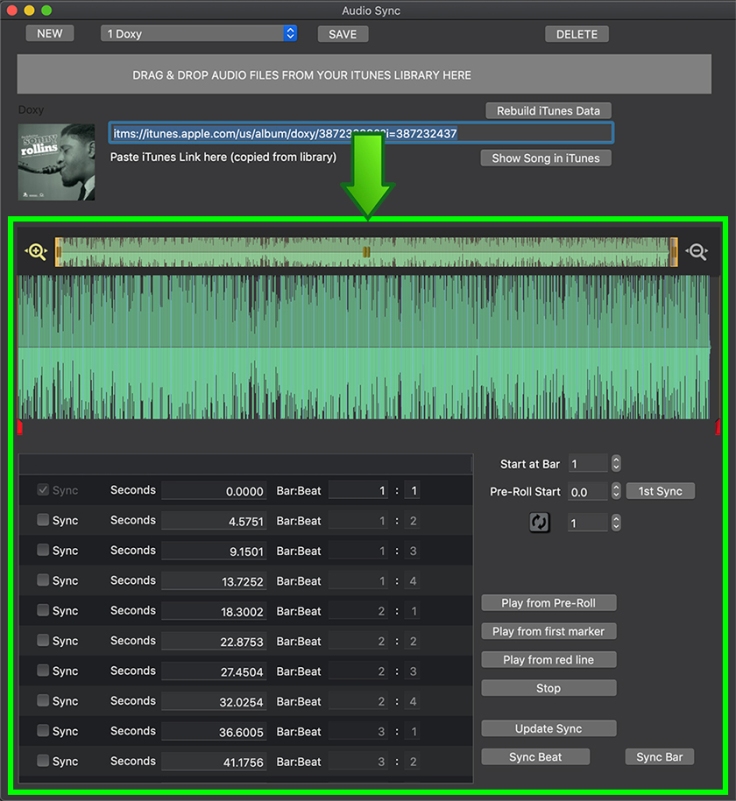 The top waveform shows the entire track, and the one below it is the zoomed view of the track determined by where the zoom is set in the top.

How does the audio-sync work?

You have a progression with a number of measures. In our example, Doxy is a  16 measures long form.

To view the bar numbers in the progression enable the “#” button

I will explain the syncing in two examples, one with the form played once, and another with the entire track (the form will play several times)

Example 1: Syncing the Form only once

Mapping Tonal Harmony Pro has already created all the sync markers for every beat in the song. There are two types of sync markers: Key-frames and Calculated-frames

Every songs has one initial key-frame and one final key-frame. If you look at the table of frames you will see only the first and last are checked (meaning they are keyframes) and disabled (you cannot make them “calculated frames”)

The only thing we need to do is set the time of these two markers to the correct second in the audio track and, if the tempo was steady, the progression will be synced to the audio.

Zoom in all the way to the left and then find the place in the time line where the first beat in the song is played and drag the first marker to that place. 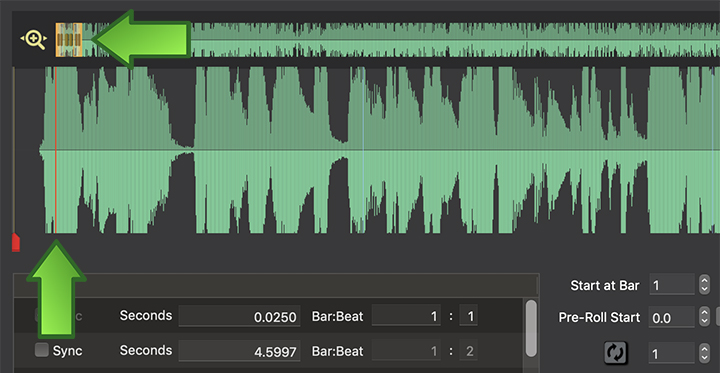 To find the place and check if the first marker is correctly placed use any of the 3 play buttons: Play from Pre-Roll • Play from First Marker • Play from the red line

Remember the song is 16 measures long so the last marker will be bar 17 beat 1.

Zoom out to at least fit the entire form and then using the red-line find where the song ends. Then select the last marker in the list, play from the red line hit the Update Sync marker at the exact moment when you hear the downbeat for measure 17

DONE! Now save it and play it, close the Audio-Sync window and play it from the multi-staff panel.

NEXT: Example 2: Audio-Sync with multiple repetitions of the form