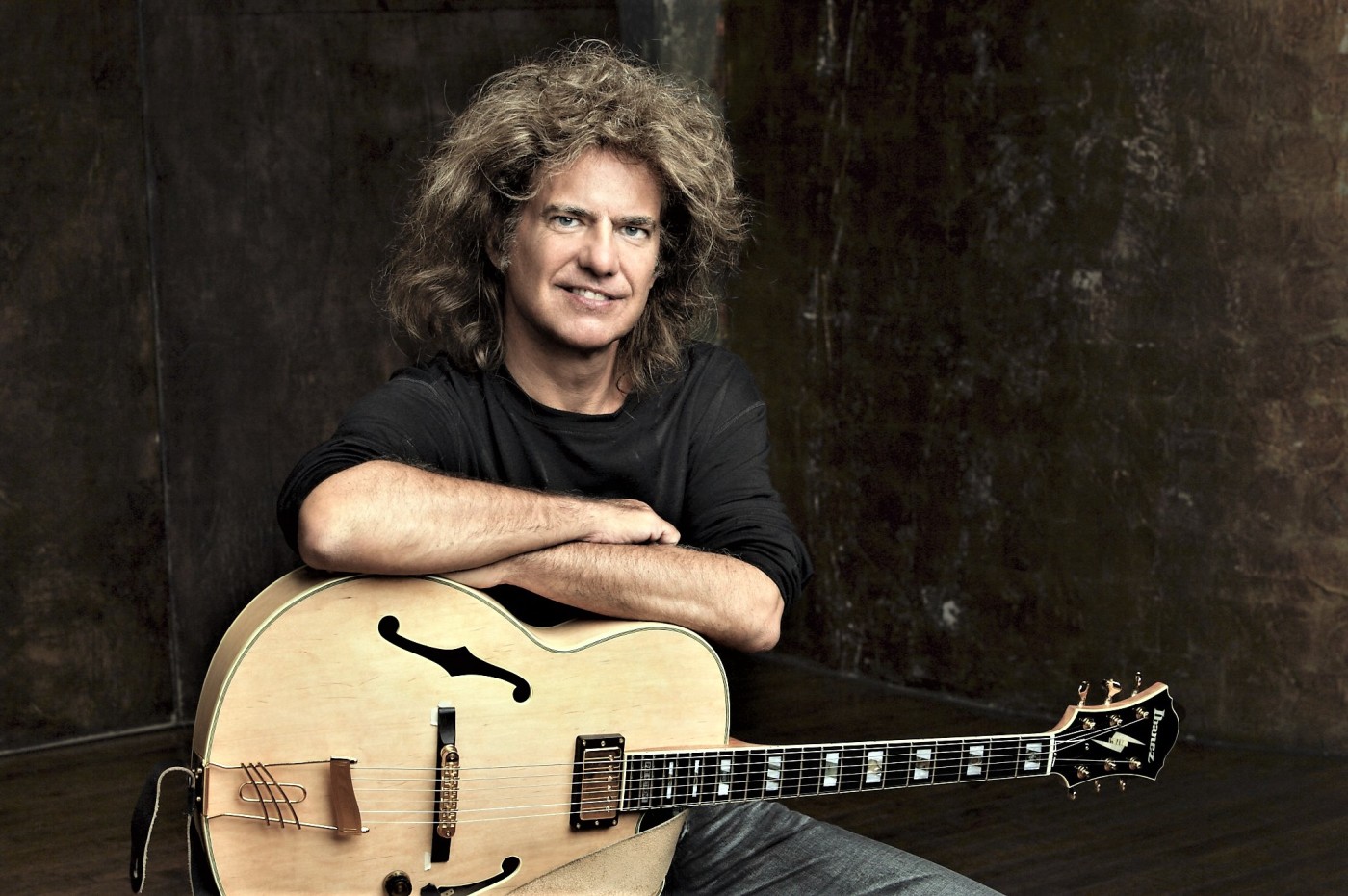 In this new series we will explore the Harmony and Voicings of Pat Metheny applied to the piano. These are intermediate to advanced piano lessons. So, join us and learn more about the harmonic techniques used by Metheny. One of the most iconic guitar player and composer of our time.

We are back with Pat Metheny. Let’s take a look at our Composition Study No.1.

We’ll get into the details on where and how we’ve applied the techniques we talked about in the series. If you haven’t seen any of the videos, I strongly suggest you do so before watching this video, because we’re going to dive even deeper into the concepts that we’ve introduced in the series so far.

I want you to pay attention at this moment to the 3 consecutive notes in the bass. They are ascending in stepwise motion. This is going to be our driving force, harmonically speaking.

So, you get the idea. I’ll play the entire piece at the end of the video. Did you catch all the different variations of that ascending bass line? Which key is this piece in? And don’t bother looking at the key signature , because that’s not going to help at all…

As we talked about in the previous episode, Pat Metheny’s music uses elements from tonality but the key center is constantly changing. When you write in this style you have a key in mind but you’re also considering other emergent properties. This will allow you to treat the current key more like a suggestion.

The backdoor progression bVI – bVII – I

We wrote this piece with the key of F in mind. But not F major or minor, just F. Remember,
in tonal harmony we can borrow from other modes.
That’s why our map of Mapping Tonal Harmony Pro shows the chords from major and minor simultaneously. In fact we could be in any mode of F. A very effective harmonic progression is the back door progression a bVI bVII to I . In F major, that gives us: Db to Eb to F. If we look at our map in a jazz setting, the default bVI is a maj7 chord from F aeolian or natural minor, and the default bVII is a 7#11.

But there are other options available to us. This isn’t the only perspective that we’re going to consider because we aren’t trying to exclusively follow the rules of tonality. If we do that, we’ll end up sounding like a tonal jazz tune. In the intro we got rid of all the notes that clearly define these modes, and just play perfect 5ths on the left hand and an F47 quartal on the right hand as a constant structure:
F Bb and Eb. This is going to suggest the key of F, but not an exact mode of F.

This allows us to open a whole set of different paths that we can walk through. and we still get the ascending bass line Db Eb F.

By the way, we’re going to enhance the ambiguity even more, by anticipating all these chords by way of an eighth-note.

Did you notice how the last chord was a Gbmaj7 lydian?
This chord is acting as a chromatic approach from above to our target: the F chord.
This is another chord from the tonal landscape the bIImaj7. And we use the C note (the #11) to get that lydian sound of the bII. This chord delays the arrival to our target (the F) making it a point of resolution. It tonicizes the F.

Are we in F major? not for long

So now, we’re in F major. Right? Look, we have F A C and G. An Fadd9. A nice one chord in the key of F major. But not for long. We’re moving on right away, switching to F mixolydian by introducing the Eb note instead of the expected E
natural from F major. This way of constantly reinterpreting where we are is essential if you want to achieve these colors in your song. Use the rules of tonality to your benefit, but don’t let them dictate every move that you make.

So is this the key of F? Well, the melody was designed considering the key of F. It’s just an F major arpeggio. From this perspective we could harmonize the melody by using F to C/E to Bb.
A I – V – IV progression. Or we could have gone even higher on the map levels and use the V/V (a G chord) and have F to C/E to G/B. I actually really like this G/B. So, if we want to create an ascending bass-line, like we mentioned before, I could have some chord over G, to some chord over A, to G/B. And what’s a good chord in the key of F with a G on the bass?

The ii chord of course. Gm7. Does my melody C A F fit in with Gm7? Sure does! The F major triad is actually an awesome upper structure of that chord, as we talk about in our upper structure triad course. We get the 11th (C), the 9th (A) and the b7 (F). Two available tensions and a guide-tone. This is gonna sound great! So, the C A F isn’t a I chord anymore. Now it’s an upper structure triad. And we’re still in the key of F because this Gm7 chord is a ii chord. So, my chord with an A on the bass could be an F/A or the iiim7 chord (Am7) The progression iim7 to iiim7 is also a great progression.
Again, does my melody G fit the Am7 chord? Well yes it does! It’s the 7th, a guide tone. But now is a good time to reconsider emergent properties as we talked about in our previous videos. On the first chord we’re playing an F upper structure triad over a Gm7.

That’s bVII major triad upper structure on top of a m7 chord. F is the b7 of Gm7. And we get tensions 9 and 11. But notice how our melody on the Am7 is a G (the b7) So, if I reconsider the upper structure as an emergent property, and I apply it to our Am7 chord, I get a G major triad on top. And if you look at the score that’s exactly what we did on this G. Here’s the Am7 in open position, and here’s the G major triad on top.

It goes without saying that we would have never used a natural 9th on a iiim7
chord ,if we were thinking tonally. The iii chord is a diatonic chord. It’s Phrygian with a b9, not aeolian. And we can reconsider another emergent property once again. Now we have two consecutive m7 chords with a major triad upper structure on the bVII: F over Gm7 to G over Am7. Our next chord has a B as the bass and a D in the melody.

So, can we use this bVII over m7 constant structure here? Almost!
The next chord should be an A major triad over Bm7. The problem we have is that our melody is a D (the 3rd of our Bm7 chord) But our upper structure a contains the notes A C# and E. Since we want to keep the melody D at the top, there’s no place to insert our upper structure. We can change the D melody to an E or C#. Or go back to our B/B target. Or even better,
combine all these ideas together!

So, if we can extend the melody using the E and the C#. And now we can use the G/B on the D, and the A over Bm7 with the E to C# melody. This is going to work great! And we still have our constant structures. We’re just delaying the last bVII over m7 structure a little bit. And we’re still using the G chord, our V/V in the key of F

But we can go even further and add an F# into the G/B chord. Of course this goes against tonality, since the V/V is a mixolydian chord, which should have an F natural not an F#. But the F# makes the chord into a Gmaj/B, which is very close to a Bm chord, our final target. So now our melody sounds like this…
It probably also goes without saying that there are infinite paths to take, and we shouldn’t always use theory to write.

Sometimes it’s better to use your ears

Sometimes it’s better to just use your ears, write what you like, and forget about analysis or emergent properties, or tonality altogether. But it’s nice to know all these concepts, so that we can use them to develop and push our ideas forward. In fact on the second statement of our theme we used a different path to harmonize our melody. Take a listen… In this case, we kept the G/B as our target.
So this time, we delayed the ascending bass-line G A B with a chromatic approach from above to the B. That’s this C note right here. This gave us the opportunity to interpolate a secondary dominant of the V/V (G/B), which is a D7. And instead of having the E-C# extension of our melody, as in our first statement, we shifted that embellishment to an inner voice, here. By the way, we transformed this inner line to function as an echo of the last motive of our theme.

So let’s finally take a listen to the entire piece. But before we do so, let me remind you: If you’re an Exclusive Member you can now download the entire score accompanied by a replica with notes on all the techniques that we used throughout today’s video. So, go to the community tab to find a link to the download or become a member here